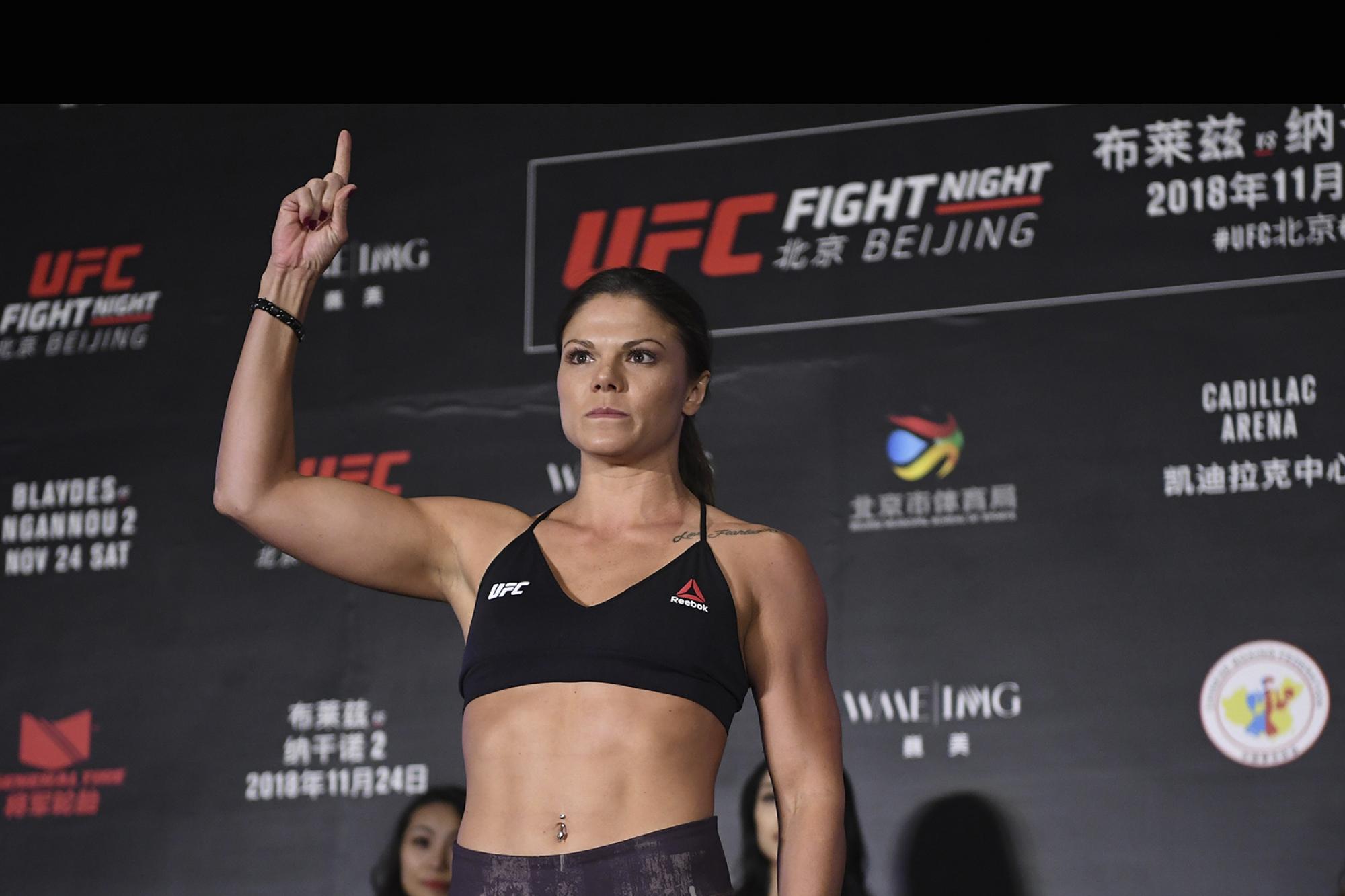 Lauren Mueller followed up her contract-winning performance on Dana White’s Tuesday Night Contender Series with one of the great fights of 2018 when she fought Shana Dobson at Fight Night Glendale. Just like that, the newly-minted women’s flyweight division was on notice.

Her second UFC fight, however, resulted in her first career loss. Fighting outside the US for the first time last November, the travel and short fight week took a toll on Mueller in Beijing where she was submitted in short order by Yanan Wu.

Lesser fighters would have been devastated by the setback, but Mueller has emerged even more cerebral and confident from the experience.

“What can I take from this?” she asked herself. “How can I grow? I know my work and I know that’s not the fighter I am. [This next fight] is gonna be completely different, and it’s going to shock people.”

Back in the States for UFC 236, “Princess Tiger” looks to right the ship against Poliana Botelho and reestablish her threat among flyweights.

UFC: There’s a popular saying in this sport that if you’re not winning, you’re learning. Would that be fair to say about your last fight?

Lauren Muller: Oh my gosh, yes. I learned so much. At first, you know, it kind of hurt my ego. Of course,  that the fighter mentality. I was in such a fog the whole time being out there, too. It was weird, because the next day I woke up and I felt like that was the day I was supposed to fight; I didn’t feel like I had fought. The whole thing was huge growth for me. I'm still new in this sport. Five and one now. I didn't have an amateur record coming into this sport. I think I'm absolutely worthy of being here as a pro athlete.

But yeah, there was a lot to be said, a lot to grow from. The travel in itself, going that far to China; I had no idea what I was going to do to my body. I've never traveled that far before, you know? And having only three days before I had to cut weight, and gaining weight from that kind of a flight. Then I had to cut more than I usually would. So that affected me. And you know there was a few other things like I had some annoying injuries through camp. I'd never had injuries before, so that mentally kind of got to me. I told my coach performing in that fight that I did not feel like me. I felt like I was in a fog. Even though my body was going through the motions, it was like my eyes were closed. It was really weird.

So I walked away from that loss like “this wasn't a loss, this was a lesson.” This was a learning lesson.  And there's so many factors going into it that I have grown exponentially from.

UFC: What did you do in this camp to prepare for Poliana Botelho?

LM: Everything. I've worked on wrestling, stand-up, striking, kicks, defending. There's nothing that I'm lacking for this fight or for any fight. But from beginning to end, I've gone hard the entire time. I walk into training every day with a serious face. Taking it serious is my job. I'm going in to hurt this girl and to win.

UFC: Not enough people know that you used to be a nurse. What was the spark that turned you towards MMA?

LM: It's weird because I do have two sides. I have a very caring, loving side, but I have a very competitive you're-not-gonna-beat-me side. I played a lot of sports growing up. I did motorcross, softball, volleyball. Jumping out of airplanes. Anything that got my adrenaline going, I loved. After college I was going to continue the nursing career path and there was just a line of things that happened. My patient passed away. They become your family, you're with them seven days a week. You take care of them and they become family. So that loss was hard on me. Then my childhood best friend passed away in that same timeframe. I was going through a breakup in that same timeframe. So right then I had a moment to make a decision. I had just started training in a gym. I said "You know, this is what gets me going and it makes me feel good and gets that aggression out. I'm young enough. I can make that a career."

So I told my coach that I want to fight. And he looked at me he goes "You wanna what?"

And I was like "I want to fight." And I took it serious. I was in there seven hours a day, seven days a week. I took it like a job, you know? I made sacrifices. This is now my job. Training is my job. And within six months I had my first pro fight. My first win as a pro. 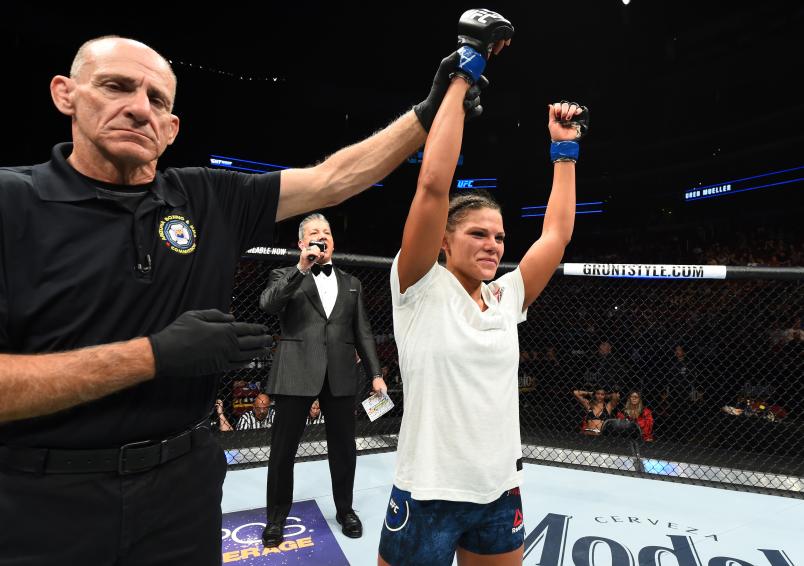 UFC: It’s interesting that you went from a career of healing people to a career of crushing people. When your teammates get injured in practice, do they hit you up for medical attention?

LM: Oh, for sure. That is instinctively in me. If you're someone I care about, you're my team and my family. My heart is with you completely. There's been times people have gotten concussions.  One teammate recently, we were wrestling I look over and he's laying on the mat, not moving, he hurt his neck. I stop you know in the middle of what I'm doing I'm in instant "take-care-of" mode. That's just that's my nature. But that doesn't take away from when I'm in the Octagon. That's a whole different Lauren. That's Tiger mode. That's kill mode. That's you or me, and you're going down (laughs).

UFC: Your performance on Dana White’s Tuesday Night Contender Series speaks for itself, and your fight with Shana Dobson was one of the great fights of 2018. What sense do you have that Saturday will be another of your epic performances?

LM: That Contender Series fight, as exciting as a fight that was, I wasn't even prepared really for that fight. I was like “yeah, I'll go up a division and fight this girl. Yeah, I want to show Dana that I can be in the UFC and compete with these girls.” And it was an exciting fight. It just brought that fierceness out.

Same thing with the Shana fight. I got in there I had fun. She threw some good combinations. I threw heat back. It was exciting it was a fast pace and that's what I like. That's where I shine, when I'm challenged by someone in front of me and then I go higher and go higher. My intensity just keeps going up and it's a whole different fighter every time.

Check out the highlights from Lauren Mueller's fight in the Season 1 finale of Dana White's Tuesday Night Contender Series.