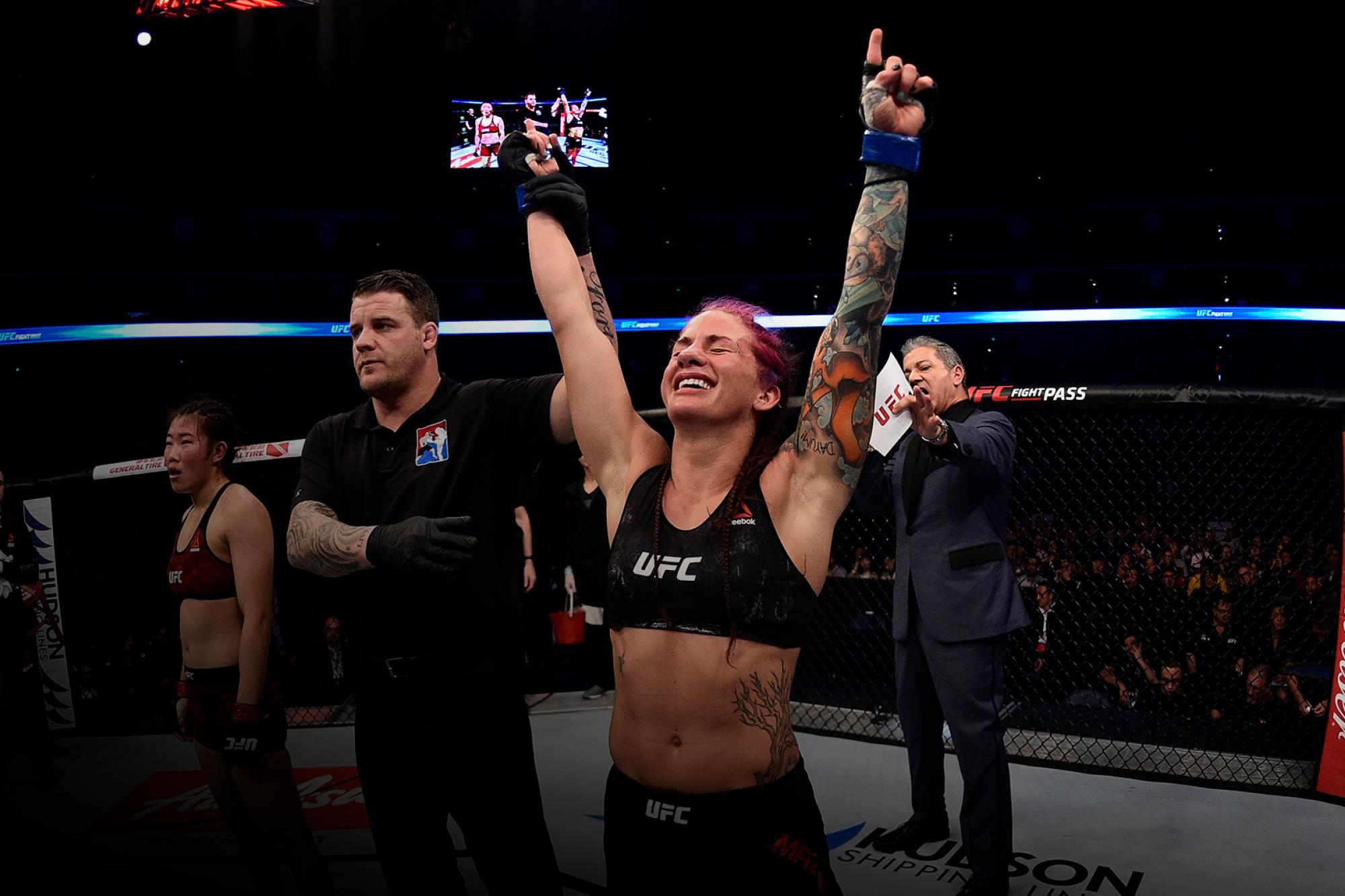 After a brief stint outside the UFC, Gina Mazany returns to the Octagon ready to prove she's one of the best.
By Thomas Gerbasi, on Twitter @tgerbasi • Jun. 10, 2020

It’s not the usual response to get on a Monday morning, but when Gina Mazany said that she was feeling “glorious,” she meant it.

“I get to get in a fistfight on Saturday and get paid for it,” she said.

In that case, some people would think the Monday feeling had to be “stressed out” and not “glorious,” but Mazany, who faces Julia Avila this weekend in Las Vegas, wasn’t backing down.

“Some people are crazy,” she laughs. “Life's weird, man.” 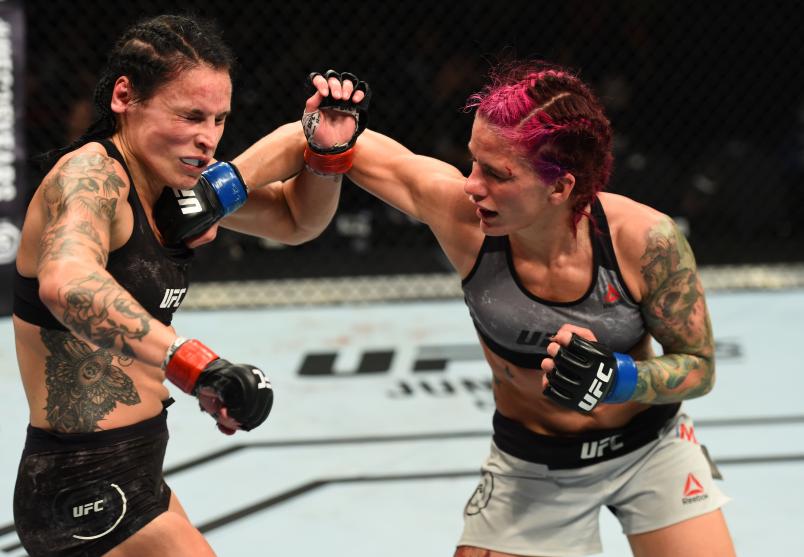 LIVERPOOL, ENGLAND - MAY 27: (R-L) Gina Mazany punches Lina Lansberg of Sweden in their women's bantamweight bout during the UFC Fight Night event at ECHO Arena on May 27, 2018 in Liverpool, England. (Photo by Josh Hedges/Zuffa LLC/Zuffa LLC via Getty Ima

This is true, but to borrow a word from the Alaska native, it can also be glorious. The 31-year-old has seen it all in her years, from her time selling snow machines (snow mobiles to us non-Alaskans), to her work for a gaming company and, of course, being on a reality TV show (The Ultimate Fighter) and in the UFC. She hasn’t taken a minute or two to reflect on such an interesting journey, though.

“I do need to sit back and be a little more proud of myself and be grateful for the hard work that I put in and all that fun stuff,” she said. “But I'm chasing those winning feels right now.”

This is the perfect time to do that, as she returns to the UFC after a brief stint outside the promotion after a pair of losses to Lina Lansberg and Macy Chiasson. Mazany did get back in the win column in January with a first-round stoppage of Valerie Barney, and while the COVID-19 pandemic swept over the country, Mazany and her boyfriend, flyweight contender Tim Elliott, made sure they kept working…well, most of the time at least…in case there were fights to be had.

“At the beginning of the quarantine, I'm not gonna lie, Tim and I just chilled and ate snacks and enjoyed ourselves,” Mazany said. “To be fair, we've never taken that much time off. We were active, we ran and lifted and stuff, but I didn't do anything MMA-related for two, two and a half weeks. It was really nice. (Laughs) Then we started training again and there were rumors of Fight Island, and you never know.”

There would be fights before Fight Island, and manager Jason House told Mazany to be ready. 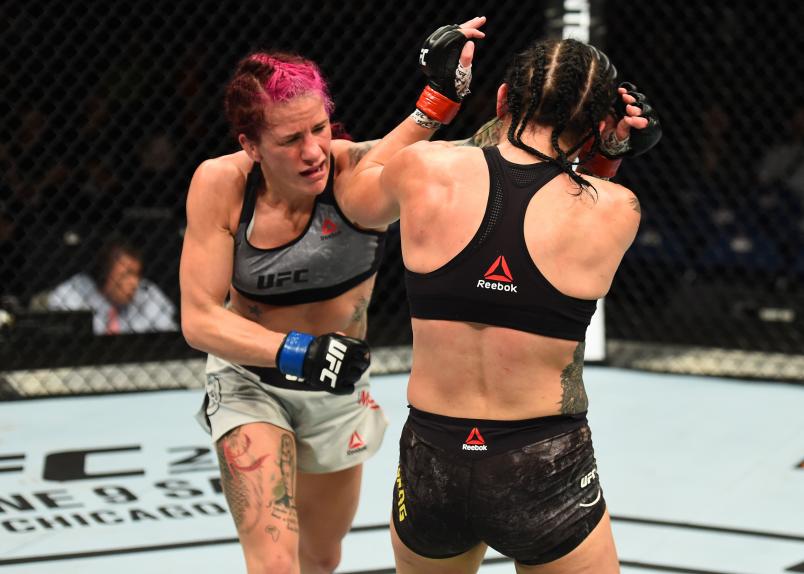 LIVERPOOL, ENGLAND - MAY 27: (L-R) Gina Mazany punches Lina Lansberg of Sweden in their women's bantamweight bout during the UFC Fight Night event at ECHO Arena on May 27, 2018 in Liverpool, England. (Photo by Josh Hedges/Zuffa LLC)

“I was kind of expecting a call but I definitely was surprised when I got it,” said Mazany, who replaced Karol Rosa in this weekend’s bout. “The morning I got the call, Tim and I were leaving practice and I said, I feel like I've been getting ready for a wedding for months now. I've been baking a new wedding cake every week and nobody wants to propose to me. I'm never getting married. (Laughs) It's such a weird analogy. But then two hours later, I get the call and I'm gonna have that cake come Saturday.”

It’s key to point out that Mr. Elliott is in the room as Mazany tells this story. So what gives, Tim?

I don’t know, I always considered the former flyweight title challenger to be an old-fashioned suitor.

“She's an independent woman,” he retorts.

“I'm waiting on him,” said Mazany. “Tim's full of surprises.” 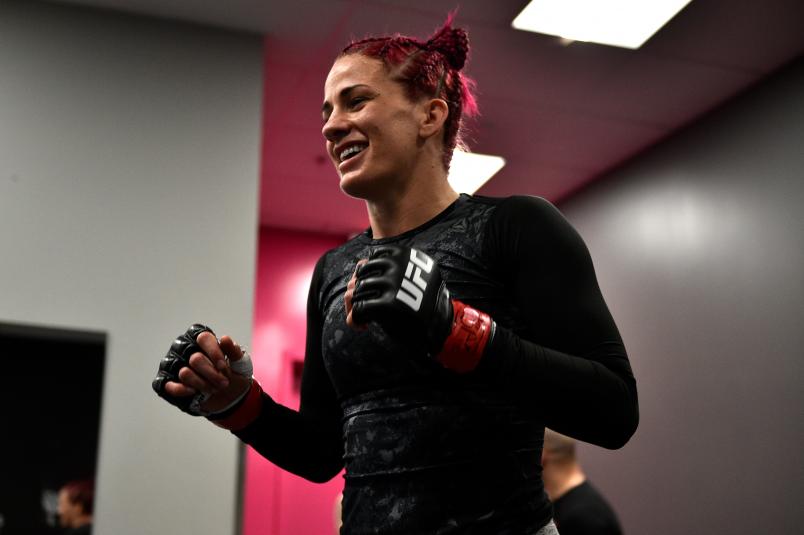 This is true, and I admit to both that I’m just causing trouble, though they do make a cool couple. But anyway, back to fighting and the reality that despite starting from scratch in the Octagon, Mazany very well could be three wins away from a move into the title picture at 135 pounds, given the dominance of Amanda Nunes and the ever-present need for exciting new challengers to make their way up the ladder. That’s an exciting possibility for “Danger.”

“A hundred percent, that is always in the back of my mind,” she said. “When I got cut from the UFC, and Tim always says this and it's ingrained in my brain now, but the goal stays the same. I really do truly believe down in my dark, sweet heart that I could definitely be a UFC world champion. I really do believe that. I know a lot of people don't believe that. I just had an interview and someone told me I'm the biggest underdog on the card. (Laughs) But the goal stays the same. I really do think I'm one of the top girls in the world. I just think I caught some bad luck.”

This weekend, Mazany gets to make her own luck against Avila, a former Invicta FC standout who impressed in her UFC debut win over Pannie Kianzad last summer.

“The division is wide open and, of all the fights, I think this is a great fight for me,” Mazany said. “Her and I, we're kind of good at everything, but I do believe in my skills and that I'm a little bit better. At this point, if anybody doesn't believe that they can be a world champion, then they shouldn't be here. You have to believe that way, you really do.”

Gina Mazany is a believer. Now it’s time to get everyone else on board.

“Life's good, and my hard work and my drive has really been paying off,” she said. “Even though I haven't had the winning record that I would like or the fights turning out how I'd like, I just know my story's not over with in this fight game. The division's wide open, let's f**king go.”