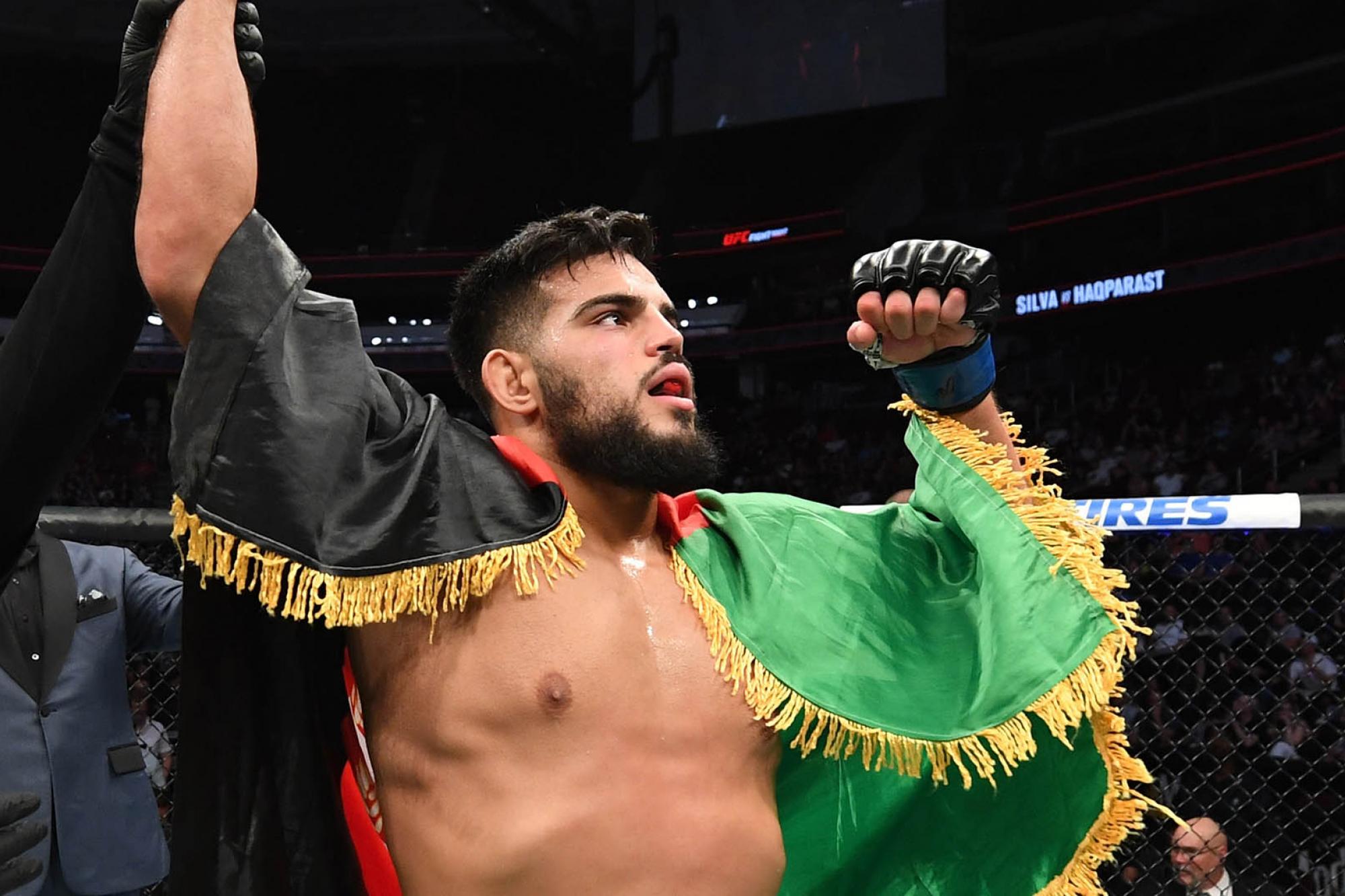 Haqparast Fights For Himself, Feels No Pressure

“I fight for myself; I don’t fight for random people who at the end of the day are going to forget you, so I have no pressure, and without pressure, you can really fight free.”
By E. Spencer Kyte, on Twitter @SpencerKyte • Jan. 14, 2020

As Nasrat Haqparast readies to make his 2020 debut against Drew Dober on the preliminary portion of this weekend’s UFC 246 fight card at T-Mobile Arena in Las Vegas, he does so as one of the most talked about young talents in the loaded lightweight division.

After losing his short-notice promotional debut, the 24-year-old has rattled off three straight victories over the last 18 months to establish himself as a name to know going forward. Selected as one of the top 25 fighters under 25 by ESPN last year, the German-born Afghani fighter appreciates that his efforts are garnering attention, but doesn’t allow the expectations of others to have any impact on the way he approaches his career inside the cage.

“To be very honest, I don’t care about what people are saying or the expectations people have now,” said Haqparast, who arrives in Las Vegas off a second-round knockout win over Joaquim Silva in August. “I have zero pressure because I don’t fight for the expectations of other people; I don’t need to (validate) what people are thinking about me — I just try to really, really bring the best performances and put everything humanly possible into each fight camp.

“I sacrificed and did everything I could — I left no stone unturned — and that’s why I never feel pressure,” added the emerging talent, who spent the last 10 weeks working with Firas Zahabi and the team at Montreal’s Tristar Gym. “I fight for myself; I don’t fight for random people who at the end of the day are going to forget you, so I have no pressure, and without pressure, you can really fight free.”

Though he doesn’t pay it any mind, the buzz surrounding Haqparast has grown steadily over the last 18 months, beginning with his unanimous decision win over Marc Diakiese in his hometown of Hamburg, Germany two summers ago. He followed it up with a unanimous decision win over French veteran Thibault Gouti in a bout that earned Fight of the Night honors three months later in Moncton, New Brunswick and then really made a splash with his stoppage win over Silva in August.

Boasting an 11-2 record heading into the fight and coming off a third-round knockout win over fan favorite Jared Gordon at the end of 2018, Silva represented a considerable step up in competition for the promising prospect and the bout was viewed as one that would help clarify where Haqparast fit within the deep and competitive 155-pound ranks.

Patient out of the gate, the up-and-coming southpaw spent the first half of the opening round making reads before opening up and landing with greater frequency in the final 90 seconds, catching Silva with punch combinations that clearly registered and foreshadowed what was to come.

Thirty seconds into the middle stanza, Haqparast uncorked an overhand left that caught Silva flush and sent him crashing to the canvas, the follow-up strikes prompting referee Keith Peterson to step in and halt the contest.

“We had a great fight against a tough guy. We knocked out a guy who had never been finished and had a very good record in the UFC,” he said of his win over Silva, which not only showcased his punching power and accuracy on the feet, but his continued evolution as a fighter, something he attributes to Zahabi and his work in Montreal.

“If you look at my last three fights, every one, I feel a big, big improvement,” began Haqparast, who lost his professional debut as a 17-year-old and has gone 11-1 in a dozen fights since. “I watch my fights and of course I’m happy with my performance, but I feel like I’m not the same guy anymore and I think my last fight showed that.

“One of the things Firas always tells me is, ‘Your last fight, your opponent is going to watch that, so we need to change it so that this guy is ready for the last Nasrat.’ We need to always improve, put new things in, and make it perfect so that my opponents aren’t fighting the guy they just watched in my last fight.

“That was the same thing with Georges St-Pierre,” he continued. “He was undefeated for his last 11 welterweight title fights and every opponent was preparing for the best GSP, but he always prepared to be the better GSP.”

And it’s that commitment to evolving and improving that constantly propels Haqparast.

“We can never learn enough,” offered the 24-year-old, sounding far more like a battle-tested veteran than a rising star carrying a considerable amount of buzz into his first fight of 2020. “Every training camp, we learn new things — we adapt, we improve — and that’s what is very exciting about Tristar and Firas: he always tries new things; he always sees that the game is changing.”

Having passed the Silva exam with flying colors, Saturday’s meeting with Dober represents another step up in competition and a measuring stick moment for the emerging lightweight.

The 31-year-old Nebraska native has been a fixture on the UFC roster for the last five years, establishing himself as a tough out and all-action competitor in the process. After coming away from his first five trips into the Octagon with just a single win, Dober has gone 6-2 over his last eight appearances, including victories over Scott Holtzman, Josh Burkman, and Frank Camacho in a Fight of the Night-winning battle contested at welterweight.

Last time out, the Elevation Fight Team representative turned in the most impressive performance of his career, rebounding from a March submission loss to Beneil Dariush by dispatching Marco Polo Reyes in just 67 seconds in June.

“He’s a tough guy — he has 31 fights and 13 UFC fights, so he’s a very seasoned fighter; very experienced,” Haqparast said of Dober. “He’s still young — 31 is very young for the sport — and he always gets better from fight to fight. He has a very exciting fighting style and we really take him seriously.

“Drew Dober is a very tough guy with very high level striking, and I think that is what the fans want — two well-rounded martial artists who go in there and try to bring the Fight of the Night,” he added. “That’s what the fans are paying for and so I’m looking forward to some exciting matchups in 2020.”

But while he’s constantly craving exciting matchups and would like to fight three times this year — this weekend, again following Ramadan, and then once more in autumn or winter — the reality is that Haqparast’s approach does not change regardless of whether he has a fight booked or not and that is a big part of what makes him such a special talent.

“I want to stay as active as possible and if I get a fight, I’m ready, but if I don’t, I always try to improve because the day is going to come where the UFC is going to send you a contract and you need to be ready,” he said. “If you work the whole year just to improve and get better and you get this one fight, this one chance to show the world how much you’ve improved, you’re satisfied.

“But if you waste the whole year just waiting for a fight contract to start training, you’re not ready and that affects your confidence,” he added. “If you know that you’ve put in a lot of work, you have a lot of confidence and you’re ready whenever they send a contract.”

The UFC has sent the contract, Haqparast has put in the work, and he’s more than ready to make his Las Vegas debut this weekend.

“This is a dream coming true because I’m a very big fan of the sport,” he said of competing on a pay-per-view event in the fight capital of the world. “My motivation has always been to be on cards like this — Conor McGregor, Las Vegas, a big arena.

“This has been my dream and it gives me a lot of motivation and zero pressure. It brings me a lot of happiness and I’m looking forward to being the best Nasrat I can be.

“Saturday is going to be a banger.”

You heard it here first.