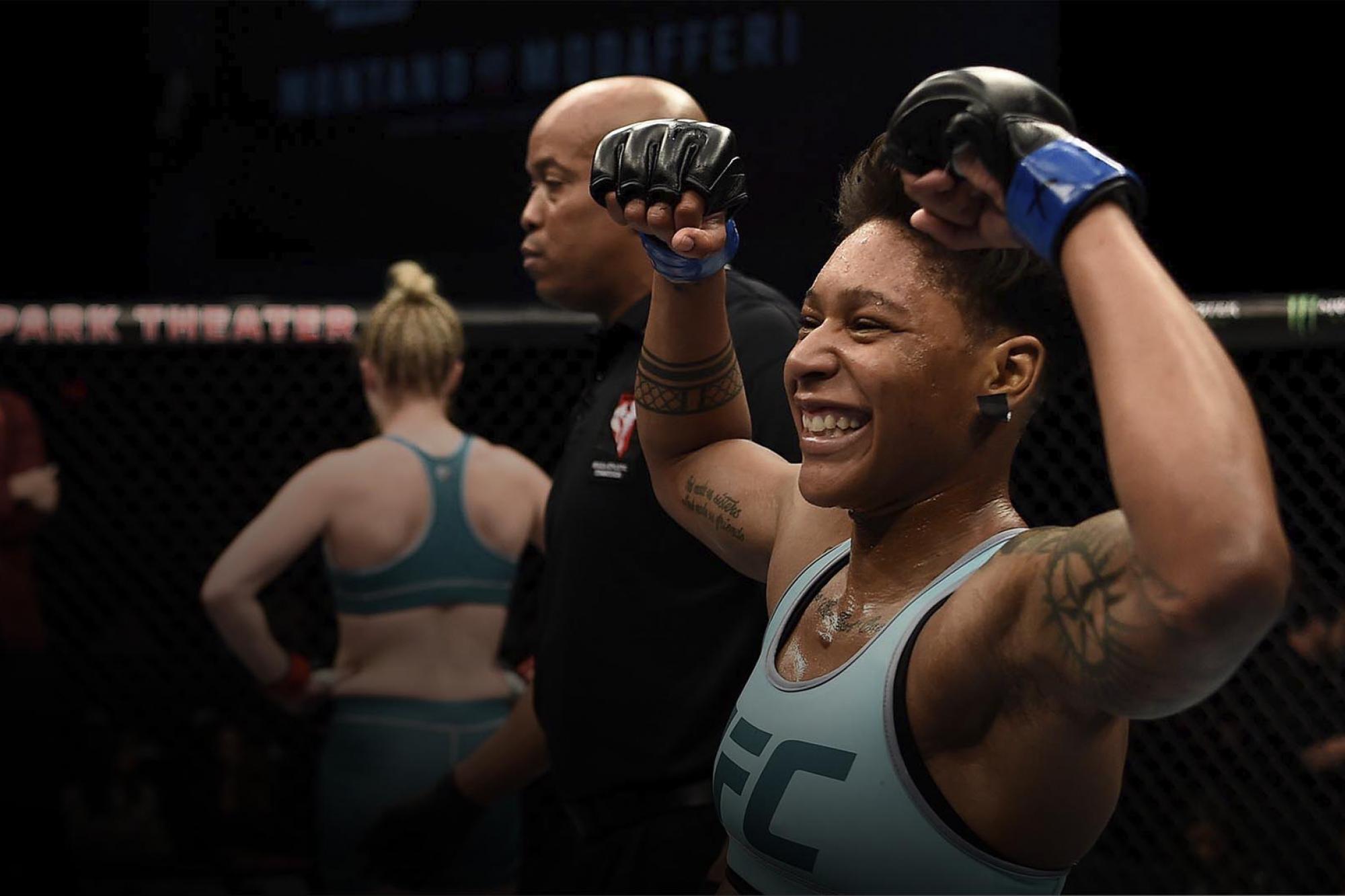 Last weekend marked the first time in six events that all three athletes featured in the On the Rise series had their hands raised inside the Octagon. I don’t lead off with that as a pat on the back for identifying winners (though who doesn’t like identifying winners), but as a means of highlighting how difficult it is to compete at the UFC level.

One of the most appealing elements about mixed martial arts when I first started falling in love with the sport was that losing a fight wasn’t the same kind of death knell it often seemed to be in boxing — they were opportunities to learn, grow, regroup and come back stronger - and we’ve seen time and again that competitors can struggle at different points in their career and still manage to emerge successful down the line.

I mention this because that feels like the connective tissue that ties together the trio of athletes featured here this week.

One is a fighter who has run off four wins since a knockout loss nearly two years ago. Another split two appearances on the opening season of the Contender Series and failed to come away with a contract, but has since rallied to secure a quality win in his promotional debut. The third is a prospect in the early stages of her career that has only lost to quality competition and shown intriguing upside in a limited number of appearances.

While there have been others to emerge from the Contender Series who have made bigger waves right out of the gate, Yusuff's arrival in the UFC featherweight division has been akin to his fighting style: clean, polished and undeniably impressive.

The 26-year-old parlayed a dominant victory over Mike Davis on Season 2 into a contract and then turned in a pair of victories to begin his UFC tenure, starting with a first-round stoppage win over Suman Mokhtarian and followed by a unanimous decision triumph over powerful Brazilian Sheymon Moraes. Saturday night, he takes a step up in competition as he squares off with veteran Gabriel "Moggly" Benitiez on the pay-per-view main card.

There is nothing flashy about the Nigerian-born fighter’s game, but that's what makes Yusuff so fun to watch. He's fundamentally sound and sticks to the basics — a swift jab, sharp kicks, good footwork — picking opponents apart incrementally rather than firing off power shots in hopes that one finds a home and ends the bout in a flash. It's death by a thousand cuts rather than one massive gash, and the steady flow of offense makes Yusuff difficult to face because you never have time to settle in and find a rhythm of your own.

Benitez has quietly put together a solid record since emerging from Season 1 of The Ultimate Fighter Latin America, and arrives in Anaheim on a two-fight winning streak, capped by his emphatic slam knockout of Humberto Bandenay last year in Chile. The 31-year-old is the most seasoned, most experienced fighter Yusuff has fought to date and if he can secure a third straight UFC win, "Super Sodiq" will find himself on the fringes of the Top 15 in the talent-rich featherweight division. 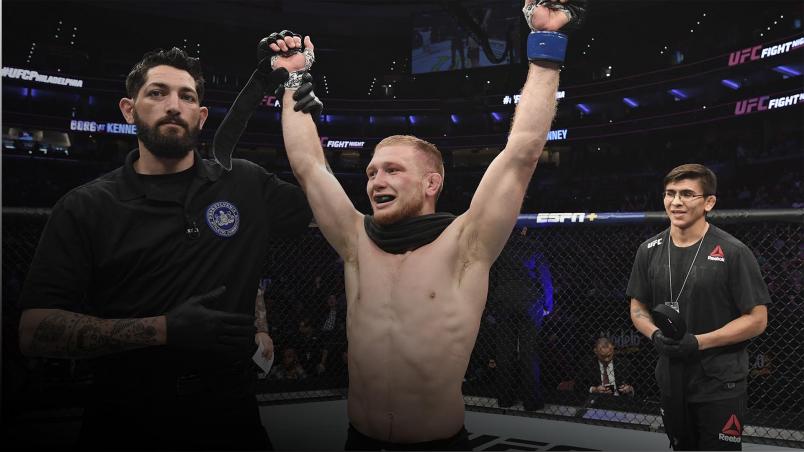 Kenney scored a unanimous decision win over CJ Hamilton in the opening bout of Week 2 during the first season of the Contender Series. While it didn’t earn him a contract, it was enough to get him a call back later in the season, but when he returned to Las Vegas, he landed on wrong side of a split decision verdict against Adam Antolin.

The decision was a tough two-piece to deal with as it not only dashed his UFC dreams momentarily, but it also knocked him from the ranks of the unbeaten. But the way Kenney responded should be the template everyone bounced from the Contender Series tries to follow, as he went 4-0 under the LFA banner, capturing interim belts in the bantamweight and flyweight divisions and secured a call-up to replace Kyler Phillips (who was replacing Liu Pingyuan) opposite Ray Borg just eight days after winning his second title.

And then he walked into the Octagon and outworked the former flyweight title challenger in his debut, pushing his winning streak to five in the process.

This week, Kenney is paired off with undefeated prospect Manny Bermudez in a really interesting clash between two very different grapplers. While Bermudez is a jiu-jitsu specialist and has finished all but three of his 14 career wins by submission, Kenney is a judo player who focuses more on control.

The 28-year-old is on a terrific run right now and his confidence has got to be through the roof. If he can march into the cage on Saturday and halt Bermudez’ lengthy run of success, he will instantly establish himself as a legitimate player in the bantamweight ranks and one of the better success stories to emerge from the Contender Series thus far.

It’s been well over a year since Dobson last stepped into the Octagon and 20 months since her scorching debut win over Ariel Beck at the TUF 26 Finale in December 2017, so it’s understandable if folks have forgotten about the 30-year-old former Ultimate Fighter contestant.

This weekend’s pairing with Sabina Mazo should serve as a terrific opportunity for “Danger” to reintroduce herself.

Dobson was bounced in the opening round of the tournament to crown the first women’s flyweight champion in UFC history back on Season 26 of the long-running reality TV competition, losing to top seed Roxanne Modafferi. It was the sixth time she’d stepped into the cage to compete, while the popular pioneer had already competed 34 times.

But Dobson rebounded impressively several months later at the finale, blasting through Beck with a series of right hands that showed the flyweight newcomer brought a little something different to the table. She landed on the wrong side of the results in her sophomore effort against Lauren Mueller before an injury forced her out of a scheduled bout late last year and resulted in the extended break that comes to an end on Saturday in Anaheim.

Mazo is the A-side of this early pairing — a former LFA champ who arrived in the UFC with a ton of hype thanks to some viral knockouts — but is the type of fighter who should present Dobson with opportunities to showcase her power and improved skills. It’s difficult to judge competitors when they’re still in the early stages of their development, but Dobson has shown flashes of upside throughout her career and if that carries over into the cage this weekend, she could be walking out of the Honda Center with her biggest win to date.