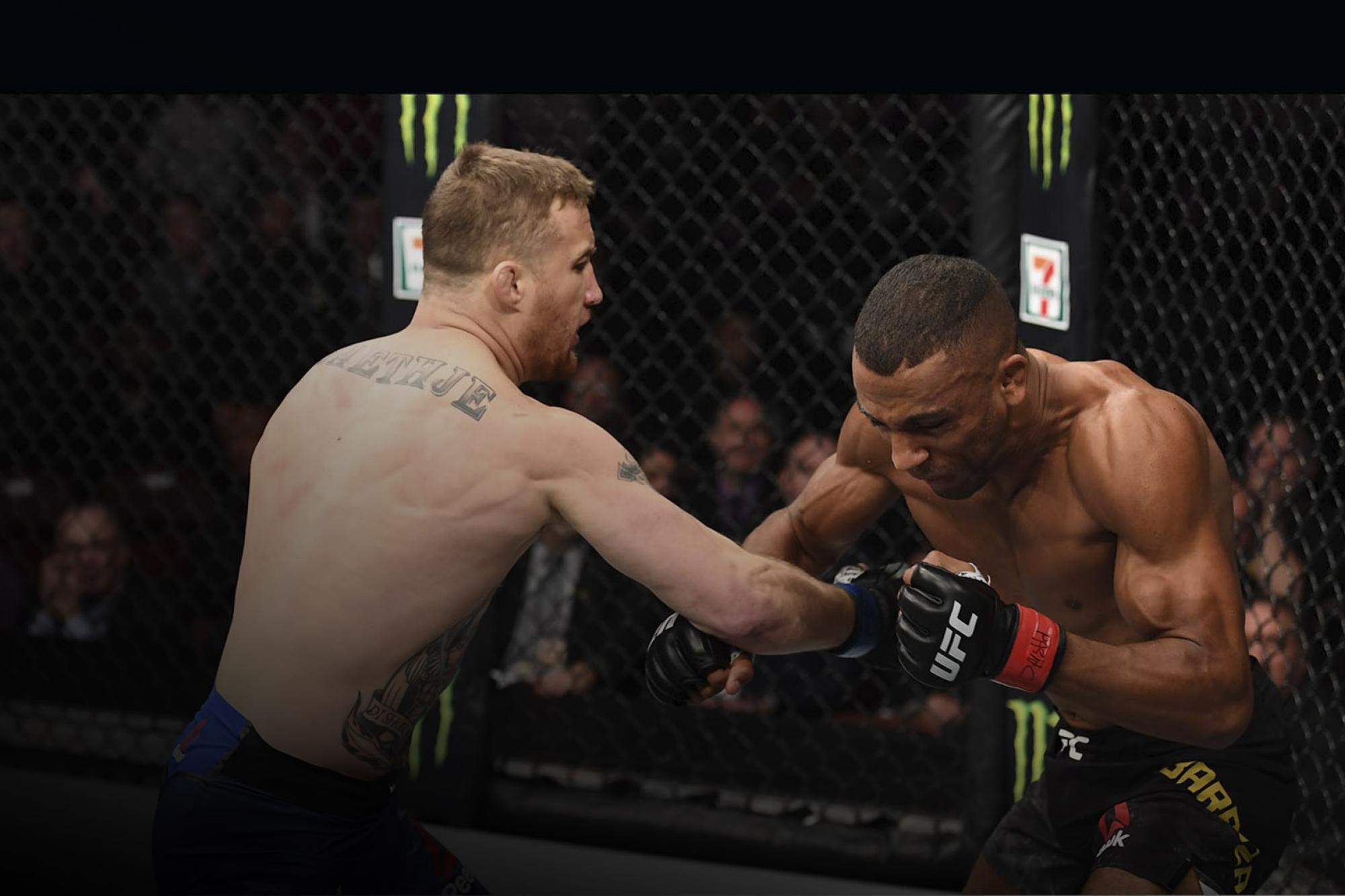 We Run Down The Talking Points Of The Evening's Standout Performances
By Zac Pacleb • Mar. 31, 2019
Fight of the Night:
Justin Gaethje vs Edson Barboza

In the least-surprising turn of events, Gaethje and Barboza delivered a scintillating two-and-a-half minutes of action that included, yes, leg kicks and, yes, powerful flurries. It seemed like Barboza was about to feed Gaethje a steady diet of leg kicks after “The Highlight” threw one of his own, but before they could really take effect, Gaethje caught “Junior” with a solid right hook.

It was all parts stunning and also what was exactly expected. Both fighters said they knew they couldn’t take any breaks with the amount of danger their opponent wielded in all limbs, and that’s where Barboza slipped. With his back against the cage, Barboza circled toward his left, and Gaethje threw a wild-but-not-wild hook, connecting with Barboza’s temple.

Gaethje called the knockout the best of his highlight-littered career. Considering the context, it’s hard to argue. Barboza was fresh off a one-sided pounding of Dan Hooker in Milwaukee, and this could be the fight that finally forces the top of the lightweight division to reckon with the Arizona-native. Who he fights next is a question, but no matter who he fights, it’s guaranteed to be exciting for however long that fight lasts.

Hello, Jack Hermansson. Because the main event was so hyped (and for good reason, obviously), the co-main fight between Hermansson and David Branch was a little under the radar. With everyone gearing up for the short-lived banger that would be Gaethje vs Barboza, Hermansson didn’t waste anyone’s time.

Less than a minute in, Hermansson sunk a deep guillotine in on Branch. A quick win is almost always impressive, but sinking in a submission against a Renzo Gracie black belt makes the victory all the much sweeter.

It’s hard to imagine anyone – fans or opponent - looking past Hermansson in his next fight.

“Bearjew” might’ve surprised some people with his standup success against UFC debutant Kennedy Nzechukwu, but even after taking several eye pokes, Craig did what he does best. Late in the third round, off his back, Scottishman yanked his opponent into his guard, securing a late submission win.

To make the performance sweeter, he probably gave the crowd the best Rocky-impression possible. With his eye showing some damage, he did his best Sylvester Stallone, and the crowd loved every bit of it.

More than a year after losing to Jeremy Stephens and having surgery to repair damages from that fight, Josh Emmett returned in a big way. His fight with Michael Johnson was back-and-forth. Had it gone to the scorecards, it might’ve even gone the way of Johnson.

Emmett never let the fight get that far.

An overhand right landed flush, and Johnson was laying on the canvas with less than a minute to go in the fight. It was one heck of a return for Emmett, and a disappointing loss for the inconsistent but talented Johnson.

“Mom-champ” status is closer to becoming a possibility after Michelle Waterson poured in a dominant performance over strawweight contender Karolina Kowalkiewicz. Showing off her speed, movement and grappling, Waterson never let Kowalkiewicz get into any sort of real rhythm.

To this point of the card, Waterson received the biggest and loudest cheers from the Philadelphia crowd, punching home the point that she is growing into a fan-favorite. Inside or outside of the cage, it’s hard to find anything to dislike about Waterson. Now, with a three-fight winning streak under her belt, it’s hard to see anything past a title shot within the next two fights for the “Karate Hottie.”

Ray Borg’s emotional return was in jeopardy when Kyler Phillips – already a replacement – pulled from the fight. Casey Kenney, crowned a Legacy Fight Alliance double-champ just a week prior, stepped in for his UFC debut and did not disappoint. The two scrambled for three entertaining rounds, and despite getting slammed multiple times, Kenney came out on top.

It wouldn’t be a Philadelphia event if the Boo Birds didn’t show up, and when Kenney’s name was called, out they came. Kenney did not care, however, saying that nothing could deter him from enjoying a short-notice debut win.

Regardless, both fighters impressed. Borg looked spry despite his long layoff, and Kenney seems like another good addition to the stacked bantamweight division.